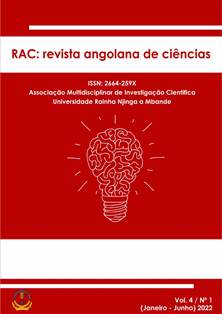 Focus and Scope
The Revista Angolana de Ciências began as a property of the Multidisciplinary Association for Scientific Research , Angola, today, as a result of a cooperation protocol signed between the Association and the Universidade Rainha Njinga a Mbande , has become a cooperative journal between the two institutions. This journal is refereed and multidisciplinary in nature; is intended for the dissemination of unpublished scientific research results (scientific articles, essays, experience reports, scientific notes, technical notes and unpublished bibliographic reviews), covering the areas of Education, Social Sciences, Health Sciences, Humanities, Engineering and others. The objective of this magazine is to stimulate reflection and scientific debate at the level of the province of Huambo, Angola and abroad. Revista Angolana de Ciências at first published every six months, in the months of June (January-June) and December (July-December). As of January 2022, it will opt for the continuous flow publication mode. This journal uses the OAI-PMH data provider: http://publicacoes.scientia.co.ao/ojs2/index.php/rac/oai . RAC   has published unpublished works since 2019, in Portuguese, Spanish and English and is maintained with its own funds resulting from the quota of members of the Multidisciplinary Association for Scientific Research, and Queen Njinga University of Mbande, publishing institutions.